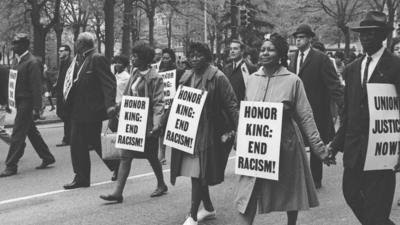 Slight deviation for today's Baggy Trousers' post, because it's hard to concentrate on worthwhile things like education when all the noise from America is hatred and division and chaos and violence. And that's just the President!

It's hard to focus when the American President is so shakey - advocating the ingestion of detergent to combat Covid-10 was a recent low point. A President who one minute is fleeing to a bunker (for an 'inspection'), the next going on a bizarre photo op with a bible. A bible? I guess symbolism is important, but what does a divisive scaremonger holding a bible mean?

In the current climate it's hard to see how America emerges from the on-going spiral of violence fueled by the deep seated racism that has existed since the country was founded.

There has to be hope though, doesn't there! The Roman Empire eventually ended (Julius Caesar and the Roman Empire couldn't conquer the blue sky - Neil Finn). The troubles in Northern Ireland eventually ended (at one point it seemed impossible that catholics and protestants could coexist). Thanks to some outstanding leadership, and a policy of reconciliation, apartheid in South Africa ended when it seemed it would go on forever. Germany emerged from two world wars to change itself.

So, I have to believe that there is hope that America can emerge from the current climate of fear. Unfortunately Donald Trump is most decidely NOT the individual to unite and heal. Just the opposite.

Unfortunately, Martin Luther King's dream is still as relevant as ever in 2020.

Here's a good teaching moment: King's I Have A Dream speech.


I have a dream that my four little children will one day live in a nation where they will not be judged by the color of their skin but by the content of their character.

I have a dream today!

I have a dream that one day, down in Alabama, with its vicious racists, with its governor having his lips dripping with the words of "interposition" and "nullification" -- one day right there in Alabama little black boys and black girls will be able to join hands with little white boys and white girls as sisters and brothers.

Task: Compare and contrast with any coherent speech Trump has made on ending racial inequality. Good luck finding one.
Posted by Wozza at 6:59 PM