The staff at Stratford High School has recently been discussing ‘lockdown’ procedures to enhance staff and student safety. These procedures will only be used in the event of an emergency which could endanger the safety of staff and/or students. They are necessary in our school in case we have any threatening situations such as unlawful entry to the school by unwelcome visitors, serious accidents, events like gas leaks and so on.

The signal for a lockdown will be by three short bursts on the bell or notification by the Senior Management Team. At that point, if in class, the teacher will lock the doors and all students will stay in class until notified that the lockdown has ended. Students will not be permitted to make any unnecessary noise. If the lockdown happens during a break all students and staff will go quietly to the nearest available class for the lockdown. If the situation occurs towards the end of the day we will inform Tranzit of the situation. The buses will be diverted until the lockdown is concluded. Immediately after any lockdown all staff and students will proceed directly to the hall for a short debriefing session.

It is our aim to practice and review these procedures during the next two terms. Please feel free to contact me at the school if you have any questions or concerns regarding the lockdown procedure.

We have recently farewelled our librarian – Julie Woods who has given us excellent service for four years, and our sports co-ordinator Iain McNae. We welcome Julie’s replacement – Marie McGregor who is a former student of SHS and head girl (as Marie Old) in 1980. We also welcome Ina Fouche as our new receptionist/ administration assistant.

Finally – it’s been a very busy couple of weeks on the sporting and cultural fronts. First - congratulations to all of the staff and students associated with our Stage Challenge. I know I’m biased but I was very surprised that we didn’t secure a place in the top three during the evening. The actual performance was extremely polished, energetic, vibrant and exciting. Second – the Manu Korero/ Pae Rangatahi competition was held at Stratford High School last weekend. It was a hugely entertaining and successful event. Congratulations and thanks to McKenzie Marriner, Paul Haenga and our kapa haka who performed brilliantly and to whaea Tina and the huge numbers of staff, whanau and students who helped on the day. Third – the exchange to Taita College in Lower Hutt was a terrific opportunity for our students to represent our school. They did so in an excellent fashion and brought a lot of credit to the school. Congratulations and thanks to the staff and students who went to Taita and to Jacky Kofoed for her organisation. Each of these events made me very proud to be your Principal.


Warren Purdy
Principal
Posted by Wozza at 2:44 PM No comments:

Yale University's open to all

It's great for students who are looking to build on their studies, or for parents seeking to expand their knowledge, or for teachers as it brings you face to face with Yale's top lecturers.

There are video and audio materials and supplementary transcripts to assist your learning. The structure, reading notes and homework assignments are just the same as any other student on campus would be given, making the lessons as authentic as possible.

I had a look at a lecture on World War 1 poetry, for instance, under the English department and enjoyed the video lecture.

If you want to have a look just click on the Yale site in my links section to the left.
Posted by Wozza at 4:58 PM No comments: 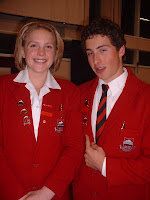 Our school's open evening was extremely well attended this year with large numbers of parents and year 8 students visiting us to find out about the exciting opportunities we offer our students.

The head students, Maggie and James explained about the sporting and cultural activities on offer, Deputy Principal Maria Potter outlined the goal setting programme that we call Poutama (stairway to success)and the graduation programme that students undertake in years 9 and 10. Mrs Butler the guidance counsellor explained her role with welcoming new year 9 students to the Stratford whanau. Unfortunately the Board chair (Pete Theron) and the PTA chair (Frosty Theron) were unable to attend but we welcome any and all interest in the PTA (just add a comment and we'll be in contact).

Here are a selection of photos from the night: 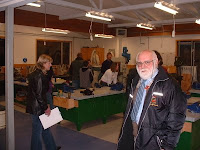 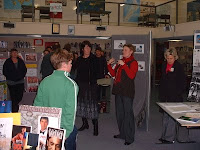 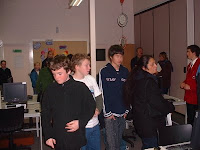 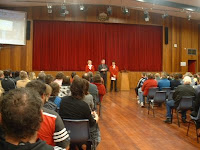 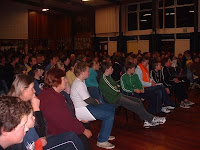 The school uniform was also on display thanks to 'Off The Cuff' - the school's sole uniform supplier (on the Broadway in Stratford). 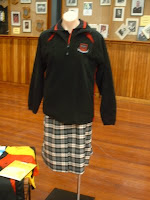 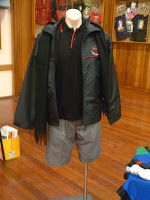 Please feel free to leave a comment or contact the school if you have any further questions about our great school.
Posted by Wozza at 1:11 AM No comments:

I have been describing this new technology to my class and some staff at school. I didn't quite believe it until I saw it. I present it here as evidence of what is around the corner (so are we going to go right on buying old fashioned laptops and building computer suites?...)

Interesting!
Posted by Wozza at 3:29 AM No comments:

The first week of the study-break had me finishing off my certification for the programme in this post's title. This is an eighteen month programme hosted by the University of Auckland with funding from the Ministry of Education. It's designed to help first-time Principals get to grips with what they are about, what they have to tackle, what they don't know, and with what they actually know! A tallish order and it's a programme that has its strengths and weaknesses. Having done a similar kind of programme in the UK (called The NPQH - National Professional Qualification for Headship) I would have to say that on the whole I was more challenged and got more benefit from the much more hands on approach of the NPQH.

[sidebar - I found zero interest in the ideas used in NPQH when I explained them to the organisers of the F-TPP, and when in the UK I found organisers of the NPQH had zero interest in the Masters in Educational Leadership degree that I'd just completed in NZ prior to taking up a position in a UK school. Why is that? It surprised me a lot that the closed view was held in both cases.]

The certificate for the first-time programme encompasses three residentials spread over those eighteen months, a series of professional learning groups, the assignment of a mentor or two (thanks to Mark Bowden and Jill Usher who were mine), shadowing exercises, and some on-line material.

When I went to the first residential last year I felt overwhelmed by the theoretical stuff and felt exhausted (all three residentials are in our study-breaks). I was also amazed at the sheer numbers of new Principals (about 300 in my intake year) - most are in primary schools but three were in secondary schools in Taranaki. 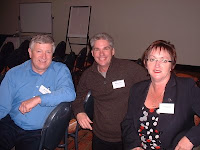 The photo shows my fellow first-time Principals from Taranaki - Allan Miles from Coastal Taranaki area school and Jenny Gellen from Waitara High School. My thanks to them for their considerable support along the way. I hope I've reciprocated.


This last residential introduced me to the ideas of Mark Treadwell. Along with some of my colleagues I enjoyed Mark's entertaining style and his personal touch. His statement that passionate teachers make the best teachers touched a chord with many of us. His call for a new paradign shift in education given that oral language/oral communication is the #1 skill required in the 21st century was also well received. I enjoyed in a similar way the keynote address by Dr Julia Atkin which gave me a new appreciation for the context of the new NZ curriculum. I also attended some really worthwhile workshops on leading the ethical school, and Derek Wenmoth's digital technologies workshop introduced me to the idea of 'twitter' that I want to explore more this term.

Finally I am happy to report that the educational jargon was well down this time around (maybe because less MOE people gave addresses?). The results from my sessions were as follows - 'bang for buck' had 3 mentions, 'baby out with the bathwater' 2, 'reinvent the wheel' 2, 'drill down' 2, 'unpacked' 3, and the clear winner was 'underpinning' with 8 mentions.

That's it for the programme. If you're an educator visiting my blog I urge you to check out the following: Mark Treadwell www.teachers.work.co.nz and www.i-learnt.com (or just google him) and Derek Wenmoth's blog at blog.core=ed.net/derek
Posted by Wozza at 12:35 AM No comments:

The second term this year has been even more action packed than usual. In nine weeks students and staff fitted in a huge amount of activity: the variety concert (Hayley a star on drums and the long poi); our stage challenge entry in New Plymouth was vibrant, exciting, professional looking and robbed of a place; Manu Korero/Pae Rangatahi for Taranaki was held at our place and the Kapa Haka was brilliant; the sports exchange to Taita was held at Taita (Lower Hutt) over two rain soaked days; and the very successful school ball rounded off the term for the seniors.

And so to term three. I signalled to the students at our last assembly for the term that the study break leads into serious pursuit of academic achievement in terms three and four. In effect this means that for internal credits term three is the business end of the year (term four has the accent on external credits).

To all staff, students and whanau - have a great break and get refreshed for the second half of the year.
Posted by Wozza at 9:36 PM No comments:

We live in a changing world...

This video is called 'Shift Happens'. It takes a look at our changing world and how we need to change with it in terms of educating our students. We have used this at SHS with the staff as a lead in to our discussions about the new curriculum. We are looking at what we do here, how we do it, why we do it and what we can do to improve things for our students so that they can leave us with a set of skills for the world. Stratford High School - Staying local...going far!!

This is a great little youtube video to indicate how new technology can be challenging. See what medieval monks make of this new invention - the 'book'.