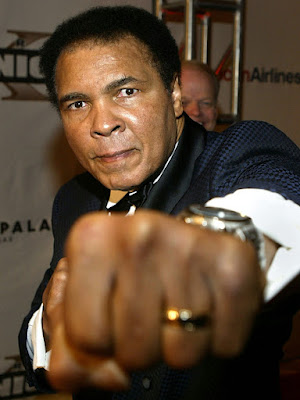 Five weeks into Term 4 in the southern hemisphere and it's been a tough 5 weeks. In fact, I would say this has been the most full on 5 weeks so far. Now - that's saying something given the turmoils of the year.

I need some inspiration to keep this pace up for another 4 weeks.

So I am turning to my good friend of mumble mumble years (we were at school together) for some inspiration.

Oh! One other thing from around this time… I met the most amazing guy.

It has become my party stopper. When someone asks “Who’s the most famous person you’ve ever met?” I think, “I got this.”

I met Mohammed Ali. Shook his hand. Introduced myself. Had a chat. After which he punched my shoulder and said, “Great to meet you, champ!” To which I replied, “I know!”

(I didn’t really say that. But the champ called me champ).

Mo – that’s what his friends call him – was such a lovely guy and, what he said about himself being exceedingly handsome – it’s true!!

(When I say punched my shoulder, I mean he gently touched me with an open hand – or else I’d still be in traction).

Why do I find this inspirational? Well first there's the story teller (let's call him Greg): he's an inspiring figure - altruistic, fun to be around, and also exceedingly handsome (hi Greg!). Plus he writes extremely well, with a personal voice that shines.

The story itself reveals a lot about us - even the great and famous are human (same with Muhammad Ali); some events are touchstones in our lives that sustain us - I've heard this story a few times over the years so it's obviously something that has become a significant meeting in Greg's life. We all have these moments of clarity, although I can't recall anyone asking me this direct question, I have flashes of talismanic meetings during educational conferences that stand out; plus, of course, Ali is an inspirational, larger than life character.

Thanks for allowing me to share the story Greg. It helped me out, gave me a different perspective on a difficult working day.

Email ThisBlogThis!Share to TwitterShare to FacebookShare to Pinterest
Labels: Inspiration