You're the apple of my eye (Badfinger) 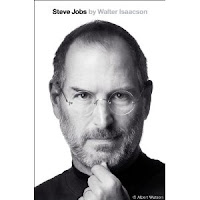 It seems that there is an awful lot of Steve Jobs product out there at the moment. I'm talking about books and articles on him rather than the ubiquitous ipad, iphone, ipod, Pixar, iMac presence in our world.

Bookshops are full of him. I can't help but notice the Steve Jobs biography by Walter Isaacson and there is also a book being advertised called I, Steve by Mr Jobs himself.

I bought the latest Rolling Stone magazine yesterday, with a cover story on Steve (I'm sure he won't mind me be overly familiar - he feels like everyone's favourite uncle).

I love the pose in each of these covers. We don't change much in fundamental ways and we can't run from our genes.

I started reading the article in the bookstore and got hooked. Mainly because his former girlfriend (who he had a daughter by that he claimed wasn't his until DNA proved otherwise) wrote such a loving piece about him.
Until the last paragraph that is. Later he became (according to her) 'a despotic jerk'; before then he had shared a romantic youth with her and others.
The accounts I've read of him seem to bear out her characterisation.

In shorthand - he was a romantic dreamer in his youth with abandonment issues (he was adopted by the Jobs' family), a seeker of enlightenment, a Dylanologist, a hard driving visionary boss who embraced capitalism, a despotic jerk, and finally a micromanaging Apple figurehead who came to terms with his life and loves after the cancer diagnosis.

Like any shorthand it's both wildly unfair while containing grains of truth.

Whatever and whoever he was as a man (and he's nothing if not fascinating) he was someone who changed the world.

I love this quote from him when challenged about starting up a for-profit company like Apple:


Remember in the sixties, when people were raising their fists and saying, "Power to the people"? Well, that's what I'm doing with Apple. By building affordable personal computers and putting one on every desk, in every hand, I'm giving people power. They don't have to go through the high priests of mainframe - they can access information themselves. They can steal fire from the mountain. And this is going to inspire far more change than any nonprofit.