Go lightly from the ledge, babe, go lightly on the ground (Dylan)

It's been an interesting week at Regency Halls. Jacky has come out a couple of times to see what I've been up to and has got a great sense of the energy in the room.

The final results from our Green Schools' project were also announced - the top three groups were The Falcons, The Wolves and The Candles.

The pictures show the two male groups receiving their trophies from the CEO of Cognition Consulting - Dr John Langely who was visiting us at Regency Halls and did the honours. The female winners - The Candles - respectfully asked that I not take their photos, which, of course, I've complied with. 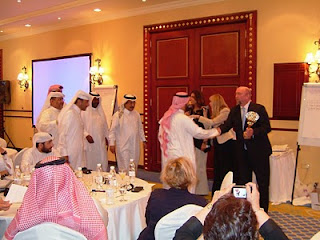 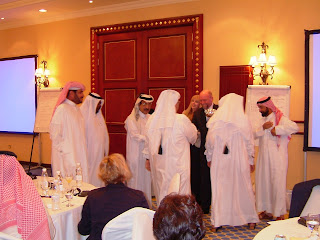 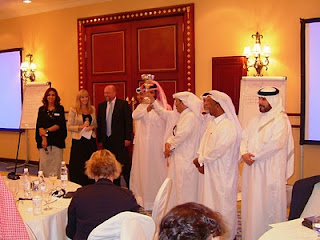 We have only a week left with this remarkable group of Qatari leaders. It will be an emotional week as John Lambert is returning to New Zealand as well. He's a remarkable person and we'll certainly miss his advice and good humour. When things turn all entropic on us, John always has a wise word and a laugh to carry us through. The phrase - he'll be missed - is a cliche but in his case it's going to be very real.