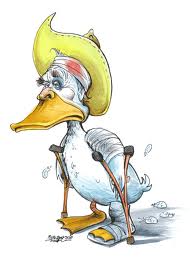 Only one week to go before the end of the Trimester and my return to New Zealand.

Putting a lid on the Middle Eastern experience is difficult because the relationships that have been established are deep ones.

I guess it's natural that I have bitter/sweet feelings at this juncture. It's a time for looking back with a lot of satisfaction, and a time to look forward to the next phase of my life back in NZ. At the moment I'm not exactly sure what that will be apart from settling into our new Hawke's Bay farmlet.

The present is what occupies my thoughts more than those things though. I'm now moving through lame duck status by moving rapidly towards the end of the trimester, even though a successor has not been found for me yet.

The lame duck stages I'm following are as follows:

ACCEPTANCE
SELF-CRITICISM
RESIGNATION
WITHDRAWAL
The reflection/acceptance stages were a few posts back. They come pretty quickly after the phone call to the boss and he doesn't say we'll double your salary if you stay!
Self criticism is mandatory for teachers. The guilt is never far below the surface for us educationalist types but then I became resigned to the fact that these were my last weeks as an educational consultant in the gulf and that's where you find me now. That and waiting for the final farewells next week and the withdrawal from Al Ain and the UAE soon after that.﻿
Posted by Wozza at 9:01 AM