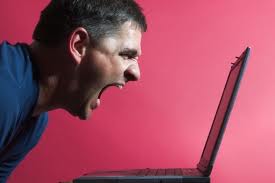 Internet frustrations are hard to deal with. We've had a couple of days where I couldn't access the internet and therefore emails.

So I had to relax, let it go/build a bridge and work on boring stuff like making an English version timetable for the school instead and breathe through the fact that I couldn't access emails from my bosses (I have a few!).

I did an English version last year when our non Arabic speaking inspectors came so I put this year's version on that.

And made lots of mechanical errors. Frustrating!

I was tired, it was a boring mechanical job, I had loads of interruptions, a headache from concentrating so hard, the computer screen is small, there are thousands of small entries to make on the spreadsheet, the sun was shining, it was hot, I was dehydrated....etc etc.

I did find it hard to concentrate on the task though. Luckily one of my errors was spotted when I published it and I did a more careful check of the document. As I was doing so I realised that I should have shared the task with someone. That way there would have been more accuracy.

Been thinking about two statements in the Todd Whitaker book (What Great Principals Do Differently):

1) Make every decision based on the best teachers (i.e. keep your superstar teachers in mind when making decisions and not the backbone teachers or the mediocre ones) and...

2) Don’t have a 'principal's pet'. As Whitaker says - our true superstar teachers don't want to be singled out for special treatment in front of their peers.

This is tricky. In my current school the Principal has go-to guys he trusts as a sounding board for decisions. Being human, we naturally gravitate to a few people whose judgment we trust.

Whitaker again - our superstar teachers will tell us the truth in a way that we can accept.

The balance is between reality (bouncing ideas off a trusted few to make better decisions) and perception (having principal's pets). As I said - tricky.

I think the informal works better - it can be more flexible, people don't get upset when not consulted, it doesn't create an aura of division in the ranks and avoids the potential for the wrong perceptions to circulate.

Interesting.
Posted by Wozza at 10:55 PM