It's all about chemistry (Semisonic)

I've found that certain types of people create a unique kind of cohesive bond when joined with like minded others. This is a rare phenomena in life. In sport it's also rare. I've supported Arsenal since 1970/71 and the amazing double winning team. I could tell at that early age that this was a snergistic team of talented individuals under a superb coach. Arsene Wenger's mighty unbeaten side of a few years ago are clearly another.

I've only experienced this a few times in my own life so far. The four examples that immediately spring to mind: the English department at King John School 2004-2006; the group who made up the 1999-2000 UNITEC post grad diploma class; The Te Kanawa House staff at Macleans College and the Eden Football Club seniors' team - both 1986-1989.

These are the special ones. That's it. Only four, and believe me - given the huge number of sports and teaching/leadership teams I've been a part of - there are plenty to choose from.

What makes them special? The unique chemistry comes from a peculiar, indefinable quality that creates both an (often) understated common purpose, and a unique combination of personalities who bloom in this new environment.

In the four groups I've highlighted there was a variety of oddly shaped pegs included, but all without exception were united by being in the group. It's a lot like John Lennon said of Mick Jagger's snippy comments on The Beatles. Basically it was a - don't knock us - you're not part of the family sort of message delivered in Lennon's best caustic manner.

I like to think that the whanau who read my Wozza's Place blog are a similar bunch of like minded souls. They hinge on me - I've defined a sixth group.

I think this is partly why social networking sites have become such a huge deal in such a short time - we're redefining our own networks and creating communities in our image and we're loving it.

That's all a long preamble to me introducing a seventh group - the Ministry of Education Principals' group that the Cognition team presents to (this includes presenters, translators, the Qatari leaders).

It's a fascinating bunch of people. They/we are united, yet there are clear differences within the ranks. For one we (the four presenters) are distinct as a group and as individuals. I was going to write that we (the four) are native English speakers - but even that's not true with Karin's Afrikaans background. A second sub set of the we (presenters) is the interpreters (Refka, Hani, and now Reem). They come from all over - Tunisia, Syria and Iraq and are all as vastly different as the presenters are.

Then we have the Principals and Deputy principals - on the surface a disparate bunch but once accepted by the group you are 'in' and woe betide any 'outsider' who tries to alter the equilibrium. I must say I'm feeling very at home and accepted now in the group. It did take a while but after a few presentations a change seemed to take place and a different feeling of belonging entered the relationship.

One of the activities I've been involved in has had a lasting affect on the organisational culture of the whole group. I asked them to give their table groups a name. The nine teams re-branded themselves and have since developed deep affiliations with the name. A very interesting phenomena in itself. For the record they are (men's groups first): Happy Faces; Wolves; Tigers; Falcons; Stars; Killer Bees; (then women's) Candles; Development Team; and The Queens.

This week Karin and I have presented the group with a challenging activity where each of the teams has to present their ideas on an environmentally friendly project for a school. Here are some photos of the teams at work (by the way - I checked carefully with each person that they were happy for me to share these photos with Cognition and my blog). First up are Stars with their model of an eco-friendly playground. 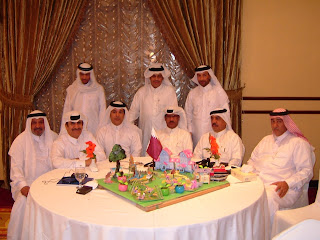 Spokesman for the Stars in the presentation was Mr Ghanam 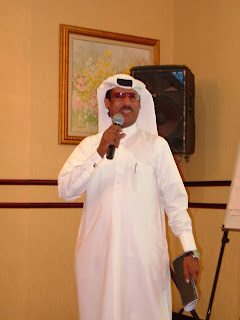 Spokesman for the Happy Faces was Mr Mohammed 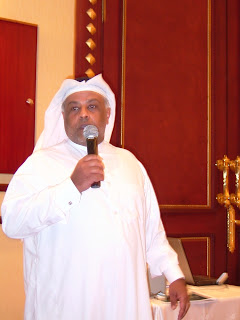 Here are the Stars putting finishing touches to their work. 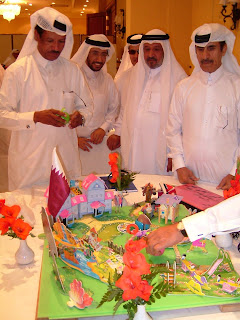 The Tigers group made an impromptu table sculpture. 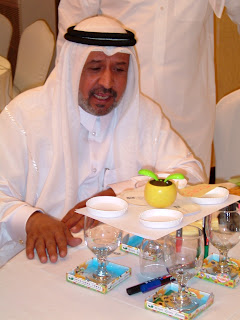 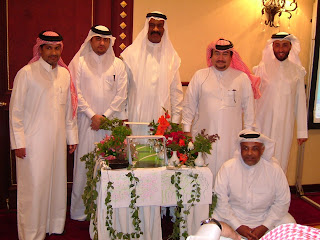 The Wolves at work on their solar powered structure. 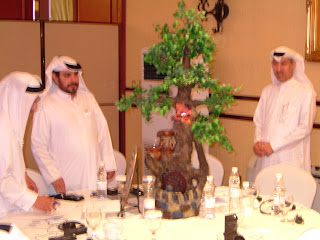 The Stars presenting their ideas to my co-presenter Karin Weise 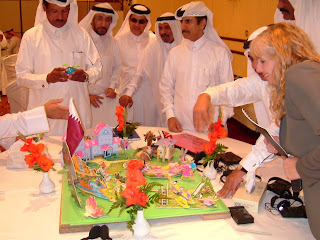 The Falcons at work, predicting victory. 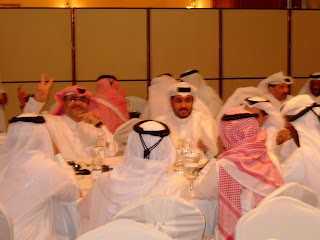 The Killer Bees table in discussion during a planning session. 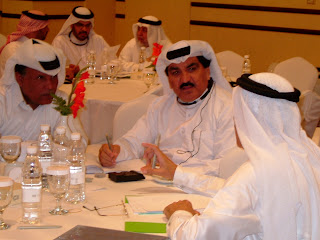 More photos will be added after the remaining teams make their presentations.