Over the last week or so I've started delivering some professional development to a leadership group set up by the Qatari Ministry of Education. The audience is made up of about 70 principals or vice-principals who have been disenfranchised. That means their schools have closed down and they have had to reapply for their jobs in the new Independent schools structure. In the meantime they have to attend special professional development sessions that Cognition Consulting have been contracted to supply. Which is where I come in.

The group has been going for about 9 weeks and will go until February. I've only been here two weeks so I'm coming along after things have settled into clear patterns with this group. They are working through the National Professional Standards that have have been written for both teachers and leaders. As a document these standards are actually pretty impressive, as far as these things go. I'm a less-is-more kind of guy (as you know) and I like the simple and repetitious format that Qatar has used. If you're interested you can find them at http://teachers.net.qa/content/standards/detail/2289 The leadership standards follow on from these ones.

If you scroll down to standard 8 you will find the standard I presented on today.Its heading is Apply knowledge of students and how they learn to support student learning and development. Right up my alley. I love to know who I'm working with and was pleased to see this as a teacher standard in Qatar.

The venue for the sessions is at a wedding reception complex called Regency Halls. 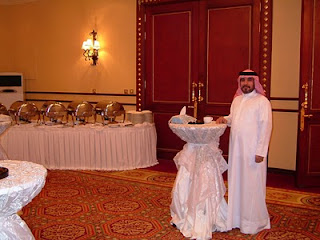 This is the entrance to the venue with one of our Principals enjoying a pre session cuppa. 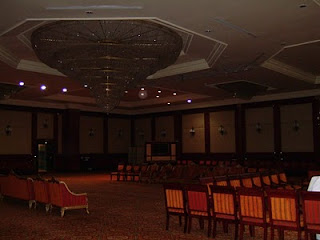 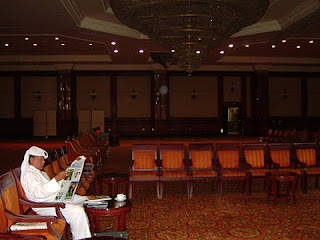 The wedding reception area where the men go for their constitutionals. 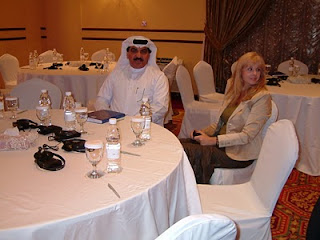 Mohammed is with one of my co-presenters - Karin. 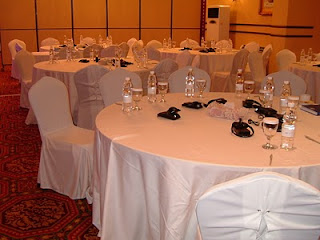 The area that we present in to the Qatari Principals.

There are four of us working with this group of 70 leaders - two kiwi blokes (John and me), one Aussie woman (Di) and one South African woman (Karin). John has led this group from the beginning. Karin has been here a little longer than me and Di arrived after me. The other four members of the leadership team (Aussie Dene, Lawrence - a South African who's lived in NZ for 12 years, Aussie Dorothy and Maureen from NZ) are working with a group called Cohort 7. This is a group of about 100 who are also aiming to be new Principals in the Independent School system. Complicated? Why yes! We are all led by Colin (another NZer).

The leaders are mainly men (about 50 of them, to 20 women) and firmly segregated - by their own social conventions. It is really interesting watching the cultural mores between the two sexes. For instance the women wait until the men have had morning tea before they venture out and they return to their tables that are decked out in bridal white, to eat and drink. The men eat and converse (and smoke) together in the main hall where the weddings clearly take place. Most of the women are in full black abaya and niqab (the veil). The men are all their customary white thobes. I haven't quite worked out the significance of the black - the purity of the white is easier to understand.

They are a really lovely bunch - funny, intelligent, thoughtful, opinionated, challenging, questionning, supportive of each other, and fantastic to work with. I'm loving the interaction and I've learned so much from them already. One of them, Mohammed, has taken on the role of teaching me some Arabic. He reminds me a lot of Jack at Stratford High School. He teaches me a new phrase each session - as he says - I am here for a while so I better learn some of their language. Mohammed is a little unusual in the 'class' because his English is pretty good. Most require a translater. We have two to help us - Hani and Refka. This in itself is something of an art - to talk and allow time for the translator is hard for me to get used to. Just one of the many challenges that needs to be overcome.