Something's missing, and I can't seem to fix it (John Mayer) 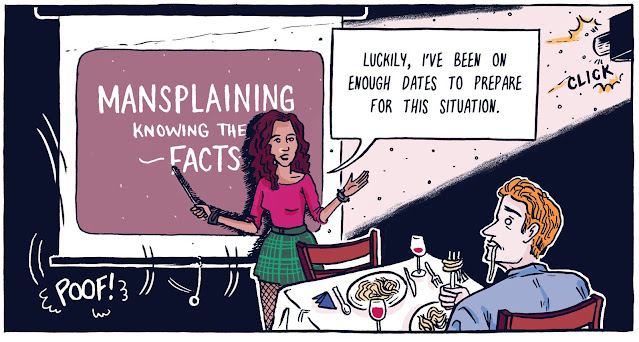 Hey there. So, it appears there is no female version of 'mansplaining'. Go figure.

Simply put, 'mansplaining' is (allow me to demonstrate): the explanation of something by a man, typically to a woman, in a manner regarded as condescending or patronizing.

But, out of the blue, apropos nothing, I wondered if there was a word that sums up the opposite, albeit extremely rarely found, situation: the explanation of something by a woman, typically to a male, in a manner regarded as condescending or patronizing.

So I looked and guess what I found? Nothing. That's what.

Ha! It appears there isn't a reciprocal term. I wonder why. It's not like that situation never happens right?

Womensplaining has too many syllables to catch on. Girlsplaining has a whiff of mansplaining about it so probably not. Euphemisms for the female gender are a definite no go I would think.

So I guess we're left with plain ole 'patronising', and 'condescending'.

Whatever you label it, and whatever the gender involved, it's not a nice feeling and is best avoided.

Email ThisBlogThis!Share to TwitterShare to FacebookShare to Pinterest
Labels: Mansplaining