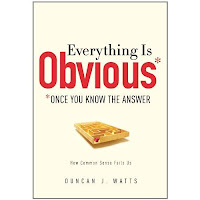 I'm currently reading a nifty book called Everything Is Obvious (once you know the answer) and it has made some good sense to me even though the subtitle of the book is How Common sense Fails.

I will return to the book a few times over the next couple of posts but I had to include this extract because it immediately made me think of one of the Cognition Education leaders who addressed a meeting in Al Ain last September.


Publishers, producers, and marketers - experienced and motivated professionals in business with plenty of skin in the game - have just as much difficulty predicting which books, movies, and products will become the next big hit as political experts have in predicting the next revolution.

The highlighted phrase is the bit in question. When Terry Bates used it at that meeting, my colleagues and I all looked at each other with a - what the hell does that mean? - expression on our faces. It was certainly new to us and we certainly wondered where Terry had picked it up from. It was clearly business jargon from somewhere.

A Google search reveals that we can blame Warren Buffett. It's a term referring to a situation in which high-ranking insiders use their own money to buy stock in the company they are running.

I think we should ban it! Even though Terry's number one acolyte, Colin Donald, has adopted it. No more skin in the game please!
Posted by Wozza at 8:15 PM